What is Black Box?

Black Box is a single-player Tabletop Role-Playing Game (TTRPG) about hacking. It uses the Carta game system, and is designed to (fairly abstractly) simulate Black Box hacking--which is attempting to break into a network that you know almost nothing about going in.

You can play it as a standalone, single-session game, or as part of a larger hacking campaign. It could also be played as part of a different TTRPG about hacking.

In order to download this game you must purchase it at or above the minimum price of $6 USD. You will get access to the following files:

Support this game at or above a special price point to receive something exclusive.

For anyone experiencing financial difficulties or marginalization, select this to claim a free copy of Black Box that was purchased by someone else.

Purchase at or above the donation price to make a free copy of Black Box available to someone else in need. You will also receive a copy of the game.

Excited to try this, just one quick thing. Can you clarify what ‘hobby dice’ means exactly? e.g. 1 d6, 2 d4 etc. It would be easy for me to whip out what’s needed.

If you have the full set, you're fine, though!

as someone who's had to do OWASP training before this might be the most realistic hacking game I've ever seen. I had a blast playing through it - definitely recommend checking it out!

Thank you so much!

I've been working in cybersecurity for a few years now, which is kinda where I got the idea. That's what I was going for, so I'm really jazzed to hear that it landed!

That’s so cool, I’m also interested in OWASP so this is a good way to practice and get into cyber too I guess :)

Black Box is a Carta-powered standalone solo rpg (or minigame!) about hacking into a network you haven't intruded in before.

The PDF is 13 double pages, easy to read, and with a layout aesthetic that matches the game's subject.

The gameplay is a little like solitaire, in that you split your cards into a series of stacks and then try to whittle them down.

Black cards obstruct your progress. Red cards can be spent to remove them. Finding two jokers wins you the game.

There's a bit more complexity to it than that. You can roll to bypass black cards that you don't have the red cards to beat, but if you fail you take Heat. Heat serves as a timer before you're booted from the system, and as Heat accumulates each move becomes more costly.

Individual cards also have prompts, additional mechanics, plot twists, and assets that shape the game's narrative and tweak the mechanics.

At your discretion, there's a campaign mode where you can gain and spend money on one-shot items to help with troublesome hacks.

There's also advice on using Black Box as a minigame in another system.

Overall, Black Box feels like a neat solo card game about managing risk and trying to solve multifaceted problems. However, I think it also shines as a fully realized minigame that you can plug into another system.

With a little adjustment, you could even re-skin it as a dungeon room puzzle, or an espionage mission, or searching a library archive.

I recommend checking it out if you have the chance.

-Both password spray and brute force are used in the document, maybe interchangeably? Are these referring to the same mechanic?

Thank you so much!

Yes, In reality, the terms "Brute-Force" and "Password Spray" are very close in meaning (I don't think interchangeable, but a password spray is a type of brute-force attack). But, seeing as not everyone who plays this reads as many cybersecurity reports as I do... I should maybe make some updates. Appreciate the notes! 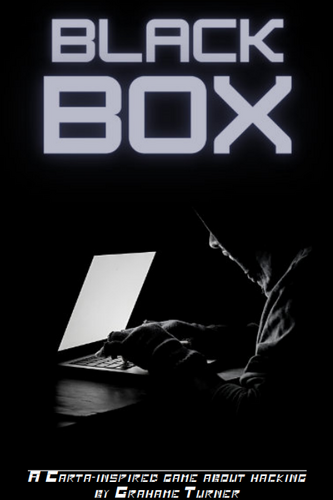 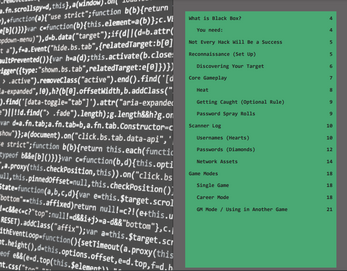 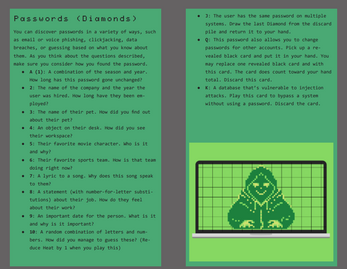